I've just released version 1.10 of the Bubbagen live-USB image for B3 on GitHub. Like the previous versions there is a choice of Init system: OpenRC (1.10.0) or Systemd (1.10.5). The kernel has been upgraded to 4.9.49-r1 which is the current latest stable version as declared by the Gentoo devs.

Like the original Gentoo live-USB by Sakaki you can burn these images to a USB key that is at least 8GiB in size. Beware that the u-boot system on the B3 is rather 'antique' and there may be issues with modern USB keys. I suggest you find the cheapest 8GiB key you can find (the ones with the U-shaped metal 'protector' / branding always seem to work).

Changes in this release: Enjoy,
Gordon 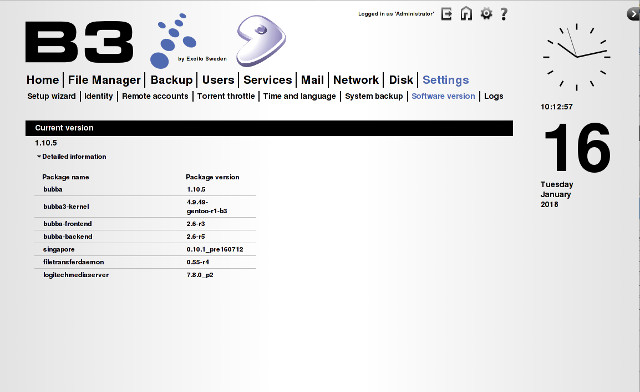 Did you get the minidlna working. I cannot see it on any of my Samsung TV. It worked on B3 original linux and on Debian stretch but I did not like the stretch as it did not have a frontend.

Do you run a B3 Wifi? Minidlna service is restricted to eth1 by default and I think this may not be updated by the frontend if you turn on Wifi and the LAN interface becomes br0.

To fix this edit /etc/minidlna.conf and change the network interface to serve on line #5. Save and restart minidlna.
Top

I used it as server only and found the solution for this a day later. It appears that rebuild db needed for minidlna and set minidlna as a default service too.
Top
Post Reply
4 posts • Page 1 of 1